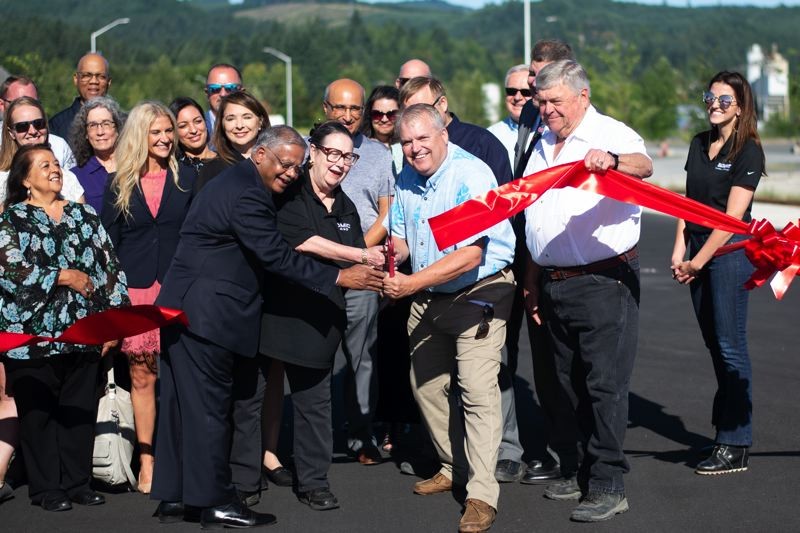 Charles T. Parker Way was officially dedicated on July 26. The freshly paved road, which extends from West Lane Road down to OMIC and other properties, was made possible by a property donation from Scott Parker, Charles T. Parker’s Grandson.

The Oregon Manufacturing Innovation Center in Scappoose is set to receive millions of dollars to construct a new facility as part of funding approved by the Oregon Legislature last month for projects across the state.

A total of $12.9 million was approved by the legislature for construction and equipment for OMIC and Oregon Institute of Technology.

Funding was approved shortly after the two year anniversary of OMIC’s opening. In 2016, the facility was also awarded $7.5 million in funding, with the assistance of Sen. Betsy Johnson, D-Scappoose. In 2017, an additional $14 million in state funds were allocated through a series of legislative bills utilizing leftover funds from various state programs, including Oregon Lottery dollars, previous reporting shows.

The mission of OMIC is to develop new metals manufacturing processes through academic research that also provides educational opportunities. With Boeing as a key partner, OMIC is modeled after a similar facility established with Boeing at England’s Sheffield University.

OMIC now has more than 20 industry partners, who pay to partner with OMIC and benefit from the research done by the center. Member dues “are used for general projects that are designed to provide an applied solution to a problem that impacts a number of our members, and hopefully, industry as a whole,” Campbell said.

In addition to the general projects, member companies can apply to have OMIC researchers carry out research for their specific company.

OMIC’s growth over the past two years has shown a catch-22 of needing to demonstrate the ability to do research before anyone will ask you to do research, Campbell explained.

While industry partners can pay to become OMIC members, they can also contribute equipment. OMIC has equipment on site that researchers at Oregon State University, Portland State University, or Oregon Tech wouldn’t otherwise be able to access, Campbell said. 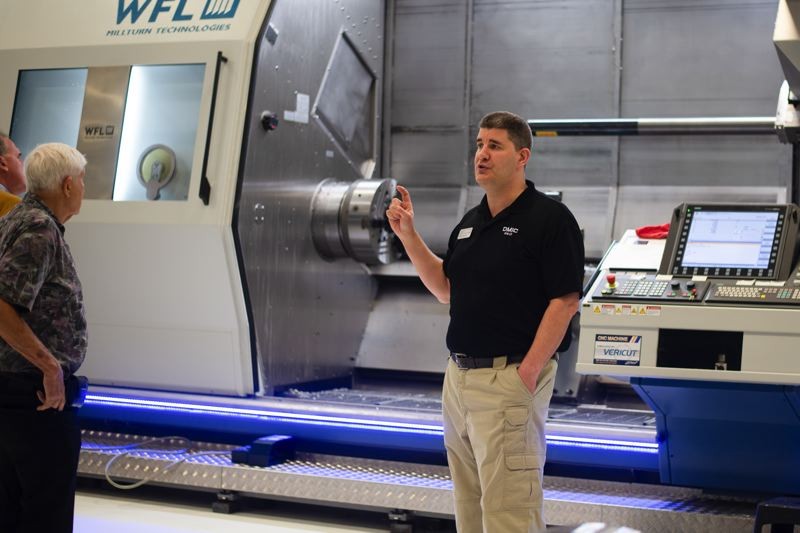 “Fortunately, we have members that initially wanted to make sure that we had the opportunity to do some research,” he said. In the last month, OMIC completed three research projects. “Each time we do that, it not only demonstrates our ability to actually do the research on site, but it also informs us about how we can do it better, and what areas we need to improve on, and what areas we can expand on.”

The research done at OMIC allows companies to advance their processes without having to disrupt manufacturing to try untested techniques. The opportunities are especially appealing to small and medium sized manufacturers, who typically have less capacity to do their own research than large OMIC partners.

One of OMIC’s partners is the Oregon Manufacturing Extension Partnership, a nonprofit consultant group.

“Our goal is to ensure that small and mid-sized manufacturers in Oregon have access to the vast resources and opportunities that OMIC has to offer them,” Jasmine Agnor, a spokesperson for OMEP, explained in an email.

Linda Wechsler is a consultant for OMEP working closely with OMIC. “Especially since OMIC is in such early stages of establishing itself, we wanted to be part of that,” Wechsler said. “One of the first things we’re helping OMIC with is figuring out what is the value to small and medium sized manufacturers.”

One of the ways OMEP and OMIC hope to assist small and medium sized manufacturers is through developing an online training on augmented reality technology. According to Wechsler, there are emerging ways to use augmented reality, or virtual reality, in manufacturing.

Andrew Lattanner, a former legislative aide in Washington, D.C., started his new role in July as director of the training facility. Campbell served on the hiring committee for the role and said he was looking for someone “who was willing to learn things, listen to the perspectives of others, and be a good partner moving forward, because this is something we’re all going to have to work together on if we’re going to be successful.”

In June, OMIC welcomed a cohort of five interns who will partner with OMIC throughout their education at OIT. The interns all received scholarships to OIT from the DeArmond Foundation.

The training facility will offer an apprenticeship program for manufacturing. Though the program is still in early stages of development, the anticipated structure is that apprentices will start training at PCC while funded by an industry sponsor, but gradually spend less time in class and more time working in the field, until they complete their studies and begin full-time work at that company.

The training center is slated to open in fall 2020.

OMIC R&D will be working to connect PCC with industry partners and “make sure that the apprenticeship training that they offer is going to be of value to the manufacturing community,” Campbell explained.

Throughout the industry, the expert machinists are now beginning to retire, Campbell said, and new people aren’t filling those roles fast enough. Apprenticeship programs aim to fill those roles, benefitting both the companies who are facing staffing shortages and the potential employees who gain access to education.

Over at OMIC, researchers are on site from the academic partners, with access to advanced equipment that provides opportunities for applied research. “A lot of research that’s done at universities tends to be theoretical, and this is work that they get to do and they get to see it implemented and it has an actual impact on manufacturing,” Campbell said.

Thank you for your interest in the food safety cohort from OMEP. We will be in touch with more details and an in-depth registration form within the next few days.

In the meantime please complete this form.

Feel free to read more about FSMA cohorts from past attendees.