Robots have long been romanticized in art and popular culture. From HALL 9000 and the Terminator series where they are seen as a menace to humanity, through to Star Wars or WALL-E where they are benevolent and even heroic, robots can be portrayed both positively and negatively.

Today, however, robots are not just fictional characters. Real robots increasingly populate real factories, warehouses and all sorts of other places of business, where they share the daily tasks with human co-work­ers. While robots sometimes get good press for increasing productivity, helping smaller com­panies compete with larger rivals, and even enabling human workers to move from boring repetitive tasks to more interesting work, 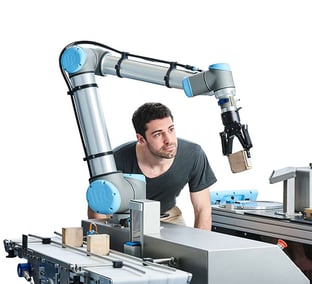 stories about them are appearing in all kinds of media with increasing frequency where they are often suspected – or directly accused – of “stealing” jobs from human workers.

But what exactly is the relationship between robots – in particular, the collabora­tive robots (or “cobots”) – and human labor? To really understand it and answer the accusations being levelled at robots today, we need to first understand that cobots are designed not to replace human workers, but to work right alongside and assist humans – whereas traditional industrial robots, which have already been used in many industries for 50 years or more, really are designed to replace human workers.

ROBOTS ARE STEALING OUR JOBS!

Recent headlines in the media, such as a recent PwC study suggesting that 4 out of 10 jobs in the U.S. could be taken by “automated bots”, play on the basic fear is that robots are replacing people as the world’s primary workforce, and that this will leave us humans with no obvious way to earn a living. Such coverage in the media and the response suggest that concern about robots taking jobs is both widespread and pronounced.

Of course, not everyone agrees. Defenders of robot technology argue that every new wave of automation – from steam engines to computers –has led to fears that technology would “take over” and render human workers superfluous but in reality has resulted in net gains in job creation, not job losses, in the long term.

The fact is most jobs require uniquely human skills to perform and recent OECD studies suggest that less than 10% of jobs can be fully automated, thereby limiting the number of jobs robots are likely to “steal” away from human workers. Demand for cobots is growing faster than demand for traditional industrial robots; BIS Research projects that the market for collaborative robots will reach some $2 billion by 2021.  So, in the future we are more likely to see humans and robots working together on the factory floor rather than humans being replaced altogether. 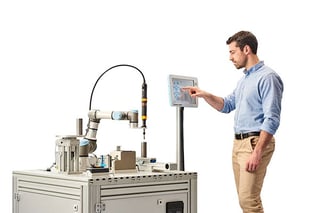 It’s a fact that neither side can deny: Some jobs will go, but robotic automation is a net creator of jobs. Most studies of the effects of robot-based automation on human employment focus on limited geographical regions or on labor-intensive industries that rely heavily on the type of workers that robots can easily replace. According to such studies, robots are likely to have a significant negative impact only on certain types of jobs – manufacturing and assembly work where robots will inevitably replace human factory workers in performing monotonous, repetitive and strain-inducing jobs. Often, these are jobs that companies are already having a hard time filling. A recent feature in Washington Post detailed how Wisconsin-based manufacturer Tenere turned to cobot automation as they struggled to staff 132 open positions that they simply could not find enough employees to fill.

Wherever they are deployed, robots improve the consistency of quality and of flow – both of which allow a company to competitively manufacture products for the global market. The small-footprint, easy-to-program, flexible and affordable cobots play a vital role in democratizing robotic automation so that virtually any business anywhere can use them to boost their competitiveness, especially important for SMEs, where cobots can offer flexibility and productivity gains needed to compete with larger rivals.

Furthermore, robots are enabling companies in high-cost countries to reshore parts of their operations previously outsourced to low-cost countries, bringing back jobs and/or creating new ones. When companies become more competitive, they – and their suppliers and other interdependent businesses – grow, creating new jobs of all kinds.

THE RETURN OF THE HUMAN TOUCH

Other trends such as mass personalization – with consumers asserting their preference for products that display a “human touch” – requires the form of advanced process knowledge that robots cannot obtain. This means that there is no place for completely automated, “workerless” factories in the world.

On the contrary, these types of “Industry 4.0” environments will play a vital role in certain types of manufacturing and other processes for a very long time to come. But because that role will always be limited, and because the demand for products made with a human touch will continue to rise, we expect a much lower negative impact on employment than what the prophets of doom are predicting.

In conclusion, robots, and cobots in particular, create more and often better-paying jobs than they replace, improve productivity and increase competitive­ness – all excellent reasons for policymakers to promote the use of robots by upgrading employee skills through retraining and other educational initiatives and to avoid erect­ing barriers to their adoption, such as taxing or oth­erwise increasing the cost of robots. 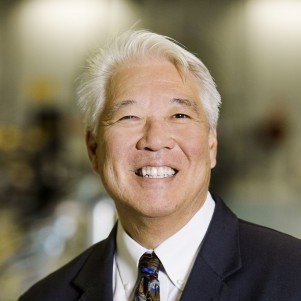 Craig Tomita has spent the last 30 years in factory automation, robotics, and machine vision. He was formerly the vice president of IAI AMERICA; and has worked in various managerial positions including COGNEX, BOSCH-REXROTH, MINARIK, ADEPT TECHNOLOGIES, and most recently, FESTO. Craig is now responsible for managing the distributor sales channels of Universal Robots in the western part of United States and Canada. He is a graduate of the University of Southern California.